As someone who has done commerce both in Scotland and England (in the United Kingdom England refers to the English Kingdom as opposed to Wales & Scotland) I always noticed a big difference in the purchasing power of the Scottish versus the English. Literally speaking the English public had a constant lack of money while the Scottish public seemed to have an abundance of money. 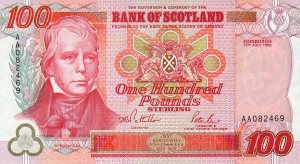 Doing some research, I was perplexed to find out that in Scotland the Clydesdale Bank, the Royal Bank of Scotland and The Bank of Scotland ISSUE THEIR OWN MONEY! You also have the notes from the Bank of England which are accepted as well as the local Scottish currency.

Therefore in Scotland, people use their local currency issued by three of their local banks plus the universally legal tender money of the U.K. the English Pound.

Notice also that in Scotland, the local currency IS NOT legal tender. This means, you have the right to refuse to accept this currency as a method of payment, whereas the English Pound is the legal tender currency of the U.K. This latter fact does not seem to cause any problems in Scotland. This explains in part the relative prosperity of the Scottish people, they DO HAVE more money!

When you dig into financial history a little, you discover some perplexing, amazing & unbelievable facts such as the Middle Ages from 1,100 to 1,300 was the MOST prosperous period in Europe. The so-called “Dark Ages” are anything but Dark! This was due to the existence of local currencies! Each major town had his own local currency such as for example, Florence which had the “Florin” a major currency of many countries today. The American Colonies had the “Colonial Script” as well as the British Pound.

The local currency was used for exchanging goods, paying for labor and investing in businesses, it was NOT used as a store of value, in other words, people did not use the local currency to save money, this type of currency was used for spending in goods, labor, necessities of life and business day to day transactions, pretty much the way it seems to be used in Scotland. (as an interesting side note, when you travel back to England from Scotland, your Scottish money IS NOT readily accepted and it is quickly withdrawn from circulation whereas in Scotland this is not the case)

When people wanted to store value, in other words, save or conduct trade with another town or far away locality, they used gold or silver coins or any other kind of money/currency known to keep its purchasing power.

Therefore you had a dual system: money to spend and money to save or conduct business transaction with faraway lands.

When you look at this, you can see that we instinctively know this. Most business people and investors have their “spendable” money in a checking account or money market account while their savings are invested in something that keeps its value such as: real estate, notes, stocks, etc.. The choice is up to the preference of the individual.

If you don’t know the difference between “spendable” money and “savings” you could for example have most of your savings sitting in a savings account or Certificate of Deposit or any such forms of cash. When you store your savings this way, you are guaranteed to lose its purchasing power. This is due to the fact that the “spendable” currency devalues a lot over time.

Another example of how not knowing the difference could cost you, you may buy gold because it is “safe” but then you need to reconvert it into cash to cover expenses, thereby losing in the process.

The problem we face today is that our Dollar is losing its value at such a fast pace, that it is also losing its capability of storing value, therefore we need to adjust our thinking a little and realize that the US Dollar is becoming a local currency, good for trade and local exchange of goods & services, but a deadly strategy to store the value of our savings.

This site uses Akismet to reduce spam. Learn how your comment data is processed.

At Prosperity Commercial Group, we have over 10 years of experience in walking business owners through the delicate maze of options in real estate transactions and helping them to achieve their business goals in the most efficient and cost-effective manner.